This book shows the anatomical variability of fruit stalks in different taxonomic units and growth forms. It is the first time that fruit stalks of a large number of species (127) are described and compared (more than 600 photos). All material was collected in summer 2019 and anatomically prepared with a red/blue stain (safranin, cellulose). Thus, all photographs are scientifically comparable.
In general, fruit stalks seem to be anatomically similar to stems, and their structure is closer to that of annual shoots than of petioles. Fruit stalks of all plants are microscopically structured into an epidermis with a cuticle, a cortex with sclerenchyma and chrystals, a phloem, a xylem and a pith.
Relations between function and anatomy are mostly difficult to explain. In any case, the study demonstrates a large variability of fruit stalks as the last extension of the stem. The book is a continuation of the description of anatomical structures in trees, shrubs and herbs, published by Kessel Publishing House. 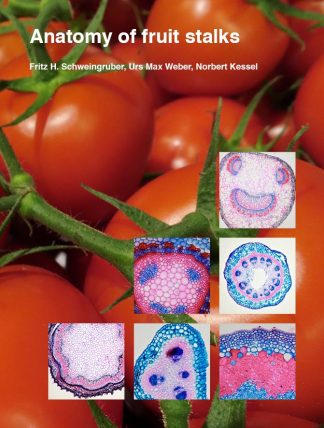