Access to Resources and Markets for Sustainable and Inclusive Value Chains: Towards Locally Adapted Institutions for Strengthening the Chain Position of Brazil nut Gatherers in the Brazilian Amazon (Inacio da Cunha, Marcelo)

Given the lack of access of forest dependent rural dwellers to resources and markets as well as the lack of an institutional environment that is conducive for reconciling biodiversity conservation and livelihood strategies in the Brazilian Amazon, the main and sub-research questions are respectively:
How do informal and formal institutions affect the access to Brazil nuts and markets by buyers and, especially, by gatherers within the Brazil nut value chain in the Lower Amazon basin?
How are institutions – that affect resource and market access – institutionalized and formalized?
By identifying self-declared informal and formal institutions filtering resource and market access of upstream value chain actors, it is scoped for leverage points towards locally adapted institutions to overcome such access limitations in the realm of strengthening Brazil nut gatherers’ chain position.
The following institutions in use have been found to be crucial for determining the (lack of) access to livelihood relevant resources (Brazil nuts) and markets in the Lower Amazon basin. The informal institution analyzed is the debt-peonage system aviamento and the formal one is the ‘Term of Compromise’ (TdC, per acronyms in Portuguese) in Brazil. The TdC is a legally-based instrument for overcoming conflicts between the Chico Mendes Institute for Biodiversity Conservation (ICMBio, per acronyms in Portuguese) – as responsible branch of the Brazilian Ministry of Environment (MMA, per acronyms in Portuguese) for managing federal Protected Areas (PAs) – and traditional populations over natural resources in such areas.
The innovative analytical framework developed herein captures how both informal and formal institutions (determinants) as well as related formalization and institutionalization (processes) affect the resource and market access by upstream value chain actors. This framework helps capturing institution-based access restrictions affecting the chain position of Brazil nut gatherers (corresponding to the main research question). It builds the groundwork for constructing a model to help understand what is behind empirical phenomena pertaining to the institutionalization and formalization of access limiting institutions (corresponding to the sub-research question herein). The proposed ‘model on analytical ingredients for self-sustained strengthening of upstream value chain nodes’ is built for transforming locally reported institution-based access problems towards the outcome of adapted access enabling institutions for strengthened upstream nodes of food chains.
Quantitative and, particularly, qualitative data were collected from ‘community’ to national level (2012–2015). In order to quantify socioeconomic conditions and resource as well as market access, a survey was conducted with 185 households in four municipalities of the Lower Amazon region. Detailed qualitative data was gathered mainly through narrative, problem-centered and key-informant interviews with the already quantitatively assessed households accounting for a respective sample of 89 actors in two of these municipalities (Oriximiná and Óbidos): mainly the ones directly involved in upstream nodes of the Brazil nut value chain (Brazil nut gatherers and buyers) yet also indirectly involved actors at all administrative levels, including representatives of the Brazilian government (e.g. from ICMBio, from MMA, from the Ministry of Agra­rian Development (SEAD (formerly, MDA), per acronyms in Portuguese), the Ministry of Development, Industry and Trade (MDIC, per acronyms in Portuguese)); from the private sector (including all three Brazil nut processing mills in the subnational region at stake) as well as from NGOs (e.g. from the Amazon Institute of People and the Environment (IMAZON, per acronyms in Portuguese), from the Institute for the Management and Certification of Forests and Agriculture (IMAFLORA, per acronyms in Portuguese), and from the Pro-Indigenous People Commission of the state of São Paulo (CPI-SP, per acronyms in Portuguese).
Results including leverage points for strengthening the chain position of economically and geographically marginalized value chain actors on a sustainable basis show: (i) formalization of resource and market access restrictions per TdC has reinforced unbalanced patron-client relations among Brazil nut gatherers and buyers already institutionalized per debt-peonage; (ii) self-reliant sustainable Brazil nut value chain development depends on democratic participation in decision-making for locally adapted TdC by transforming the governance structures of councils for managing PAs from ‘consultative’ to ‘deliberative’ ones, while co-shaping a conducive context-sensitive institutional environment, policies and service provision; (iii) ‘socioeconomic upgrading’ of the position of upstream value chain actors builds on ability and self-organization of smallholders in ‘well-managed’ cooperatives (complying to widespread cooperative principles).
Further, suggestions for actions and policy recommendations based on analytical and empirical evidences are provided – for each one of the actors directly or indirectly involved in the Brazil nut value chain at stake – as are future research ‘needs’ in the realm of self-determined local environmentally sound development. All together, this thesis offers scientific input for an outcome pathway towards an enabling institutional environment in the realm of inclusive sustainable rural development.
Finally, this thesis’ contribution lies mainly in an innovative problem-based and institution-sensitive approach to analyzing (the lack of) resource and market access towards strengthening the value chain position of marginalized upstream chain actors. The herewith developed model and, particularly, analytical framework can be applied for inclusive sustainable value chain development of agricultural and, especially, non-timber forest products (NTFPs) in different rural contexts. 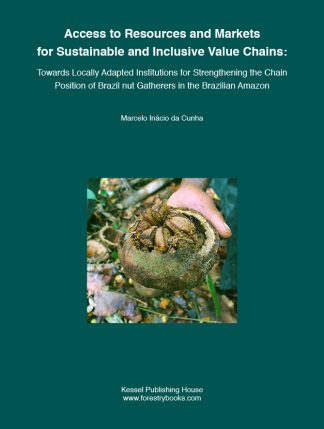